Screw the Whales... Save the Heels!!

Last night my stepdaughter, Sophia, flew in from having spent some time with her father the last few weeks. We went to the 8PM fire meeting directly from the airport and then checked into a hotel in Missoula. I woke up at 4 a.m. and could not sleep so I read for awhile before falling back asleep. I did not wake again until close to 9 AM and realized that we needed to get moving. Per last night's meeting, there was a chance we could get a permit to revisit the house between 9 and noon if we had a compelling reason. As we drove south to Lolo the smoke became thick and reeked of burnt wood… the kind of scent that is delightful when heavily diluted by crisp autumn airs. However, a concentrated dose in the Lolo Creek Complex fire chokes the entire body. When we got out of the truck Sophia immediately pulled her shirt up over her nose and mouth. 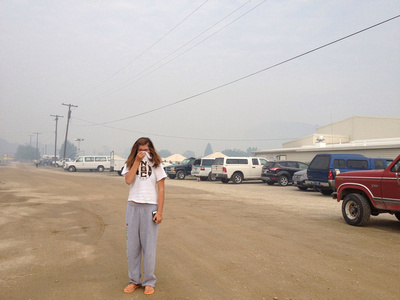 The incident base was understandably very busy. We got in the line to get a permit and were soon granted one based on the need for “medical supplies” – Sophia needed her contact lenses. 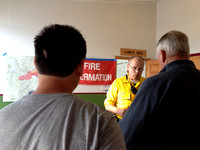 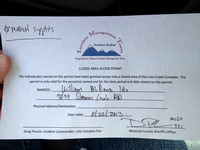 We turned west onto Highway 12 and had to show our credentials at the road closure before driving deeper into what looked like a dense fog stained brown. 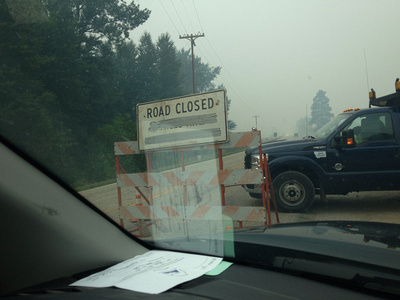 In Sleeman Gulch, we passed some large water tanks on the side of the road put there to refill the fire trucks once emptied. 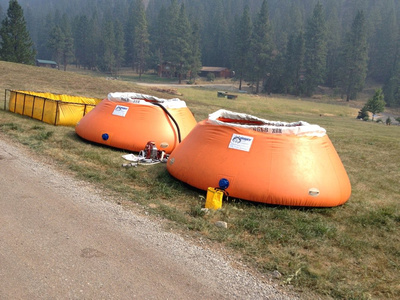 One firefighter we passed looked absolutely exhausted. He was leaning into the bed of his truck with both hands on the tailgate and his head drooped.  As soon as he looked up though he smiled a bright smile and took a big sip off his water bottle before telling us they were going to be there morning, noon and night trying to protect all the homes. I am brimming with respect and gratitude.

When we pulled into the driveway I immediately noticed some new landscape work. A bulldozer had made a run though my pasture digging a firebreak. 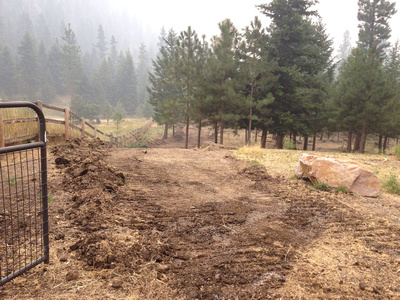 There is also a new trench on the west side of my home west of the sod roof. 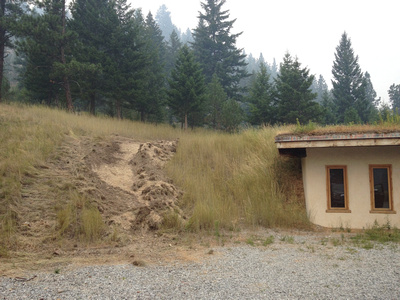 I noticed that the firefighters had moved all my patio furniture, firewood and other items away from the structure out into the yard. I felt stupid for having left this job for them to do when I am sure they had more important measures to take. I should have done it myself. I know better. Who leaves a stack of firewood right next to a house in the middle of a wildfire’s path? Apparently, I do. Oh well… I guess I was thinking about photographs and guitars and hard drives. These are gallant efforts that are much appreciated but I know where I am vulnerable. There are two sections of my roof that are composed of cedar shake. This material is like kindling. One burning ember falling in the wrong place could be all it takes. 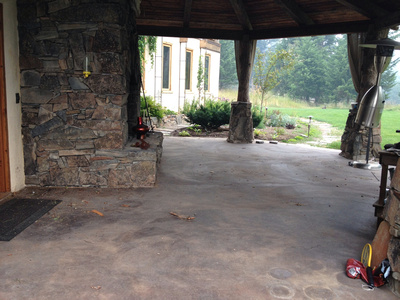 I had not made a list but I knew there were a number of things we needed to do while there. Sophia is starting school soon so her mother, still in Puerto Rico until next week, gave her detailed instructions on what to get. Sophia went upstairs and got to work. I went about the task of emptying the contents of our freezer and refrigerator lest we return to a perfectly good home filled with the stench of rotting flesh in a hot freezer (my father's suggestion based on his own personal aromatic experience).  Sophia located more photos I had missed and then we called her mother. Sophia was given the task of getting some of her mother’s clothes and, of course, the shoes! I do love her shoes and I never mind when she buys another pair which is often. Being a Cuban girl raised in Puerto Rico, Bea is Latin through and through. That means her shoes are really pointy on the bottom. That is good for me because you don’t see a lot of that in Montana and after having spent my college years at the University of Miami in the eighties I decided I kind of like the way those stilettos make my eyeballs fall out of my head. She also wears spicy dresses when everyone else seems to be wearing drab green or gray polar fleece and Birkenstocks or, God help us all, those awful things that have a little neoprene sock for each toe! And here's a bag of high heeled shoes. 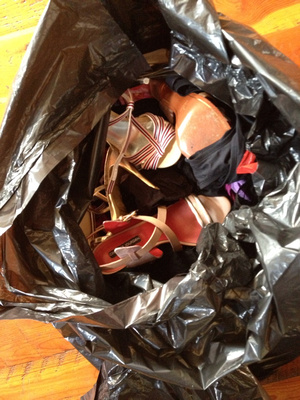 Speaking of women’s fashion, I have an old friend who decided a few years ago that he was going to make it his personal mission in life to change the course of a trend he deemed offensive in women’s fashion. He lives in NYC and each winter he documents (using smartphone camera technology) the abhorrent presence of the long, down-filled potato sacks that have become popular among some. He posts these photos on Facebook and the jokes follow. I must agree they are quite unflattering though I am sure they are quite comfortable. Naturally, a mutual friend of ours bought him one as a birthday gift last year. We all egged him on to take a photograph of himself wearing it. When I say “we” I mean me mostly. It is the least he could do for such a good friend who would spend his hard earned money on a coat to keep him warm. The next thing I knew it showed up in my mailbox as some kind of dare I suppose. I knew my Cuban queen wouldn't be caught dead in that thing so I held on to it for many months waiting for some kind of opportunity. There it was this morning in a plastic bag sitting in the corner and I knew what had to be done. Let’s call it an effigy to the absence of style and move on. If anyone feels the need to call me me out for being judgmental here please just let it go. It is all in good fun. A little levity is needed right now. If you love your michelin man coat and your neoprene toe socks just ignore me and keep right on wearing them. To each his/her own. If the coat you see in this photo survives the fire looks like something you could use let me know and you can have it. But you have to send a picture of yourself wearing it.  Hell, it might be the only thing that survives this fire! 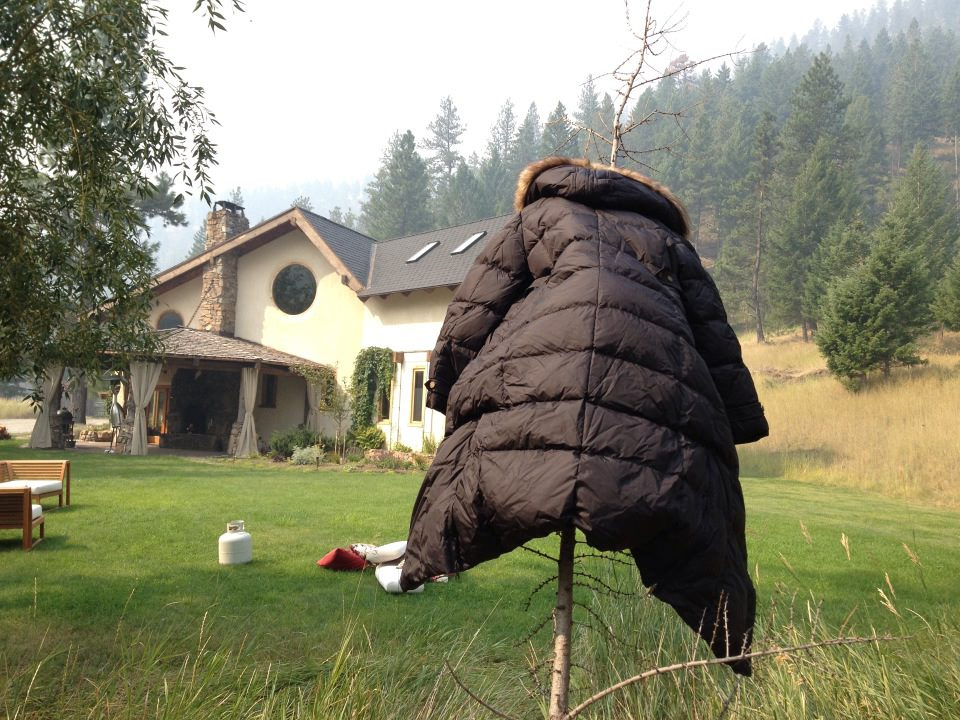 I climbed atop the roof rack. Sophia threw the garbage bags of clothes and shoes up to me and I strapped them down. For whatever reason, I did not feel the need today to take one last glance at the house before leaving. We eased down the driveway pausing briefly to allow an eastbound hen turkey with her little ones following cross the driveway. 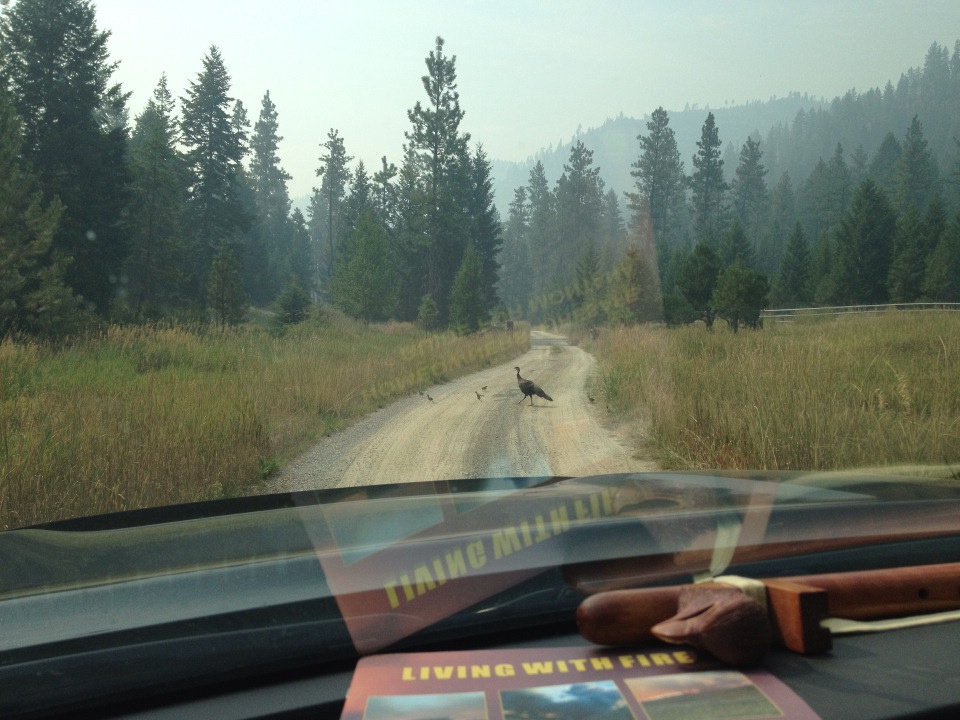 [Note: Many have had trouble subscribing to this blog but I think I have it fixed. Click here and click "Subscribe to Bill McDavid Photography: Blog by Email" in the upper right hand corner.]
Keywords: Lolo Creek Complex, Montana, forest fire
« Previous Post Next Post »

Monica(non-registered)
save the coat! Send it to your mama! I'm glad your home is still there and am praying!
Cody Ann(non-registered)
Absolutely..save the shoes. I am very honored to read your posts Bill. I know that the Good Lord above has a plan and everything will be fine. Thank you for sharing your day...be safe and God Bless you all up there! Never give up the Faith! ;)
Susie Williamson(non-registered)
I think the coat should be passed around from friend to friend and each person can add a blog entry and photo. It can be like the traveling pants. I wish I had it on the cruise. You could see how many places it could visit.
No comments posted.
Loading...
Subscribe to Bill McDavid Photography: Blog by Email
Subscribe
RSS
Recent Posts
It’s My Party Gay Skunks and a Murdered Duck A Hard Drive Screw the Whales... Save the Heels!! A Blue Moon Montana Fly Fishing Magazine Cover Our One and Only Freedom
Keywords
Lolo Creek Complex Montana forest fire Fly fishing Montana Fly Fishing Magazine Trout Underwater Underwater Photography Indonesia Pulau Palue
Archive
January February March April May June July August September October November December
© Bill McDavid Photography
Powered by ZENFOLIO User Agreement
Cancel
Continue