I was walking with a girlfriend in NYC some years back when she nonchalantly dumped her journal in a trashcan as we passed by. She had been writing that journal for a year or more. Why she would do such a thing?

“I will remember what I need to remember.” She said.

She was a master, at least compared to me, at living life in the present moment. At that time in my life, "now" was really just a word.  Having something to refer back to was not the point of her journaling efforts. My sister journals religiously and has done so since she was a young girl. And she keeps every last one of them. Something for the kids to read when they are older. Indeed, I am certain they will read them and perhaps even her grandkids and future generations. They will probably cherish those journals. There is no right way to do this but it is a good thing to do.

Obviously, we each have our own motivations for putting words to paper. My breakup with the girl who threw the journal away was the most difficult one of my life… harder than my divorce. I feel forever indebted to her for having served as the catalyst to my greater though still somewhat limited understanding of presence... of simply Being... and of all the wonderful things that come from that understanding and practice. Following that breakup I coughed up 50,000 words starting with my earliest memory. I think I made it through college before I put the pen (keyboard) down. Throughout the process I found myself awake at 3 AM laughing out loud till my gut hurt and also gushing the type of tears that heal… not the self-pitying kind. Honest tears. It was the most effective and least expensive therapy I ever had. I decided to keep those words. I have revisited them and added to them now and then since. It is written like a memoir though in its current form I would never dream of publishing it. At a minimum, there would need to be some serious name-changing or perhaps a brainstorming session for an inconspicuous pseudonym.

Today I went back to work. I got up early and headed out to Philipsburg to show a couple of ranches and tried to put in the back of my mind the reports that we may get to go home today. I came through the pinch south of Maxville looking forward to that dramatic view of the Pintlers. Smoke. Only as I drew closer could I see the very faint outline of Warren Peak. It had been a long time since I last saw my clients (though I really consider them more to be friends) so I was looking forward to it. The day was spent straddling ATV’s alongside irrigated pastures and timbered slopes. 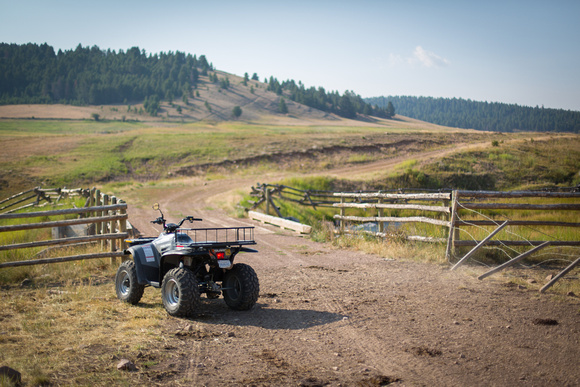 It was great to be out and about. At one point not too long after we had seen a badger scamper over the ridge I received an email that we get to go home… TODAY!!! At that point I felt like I had been invited to two great parties and I had to decide which one to attend. I will explain.

But first, here is a goat. 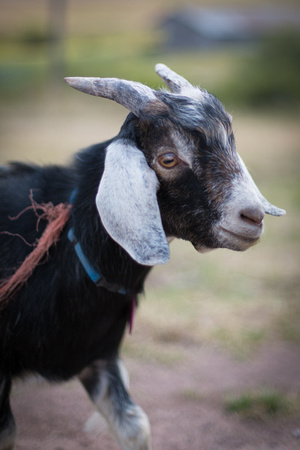 My friends/clients were staying nearby at The Ranch at Rock Creek, another property I sold about six years ago that was recently listed as “The Most Expensive Hotel in the Country” though I wouldn’t really call it a hotel. The owner says it’s like summer camp for adults (though it is open in winter as well and kids are welcome).  He called me last night after having read my blog about the fire and invited me up to the ranch. I have learned that whenever he calls with an invitation to the ranch it is best to run – not walk – to the car. He told me I could stay through Sunday night if I wanted. Wow. I could go out to the ranch, hang out with friends and do anything Western I could imagine – fish, hike, horseback ride, shoot sporting clays, ride around in a freaking Wells Fargo stagecoach, shoot archery and eat the most amazing food I have had anywhere on the planet. Or, I could go home. 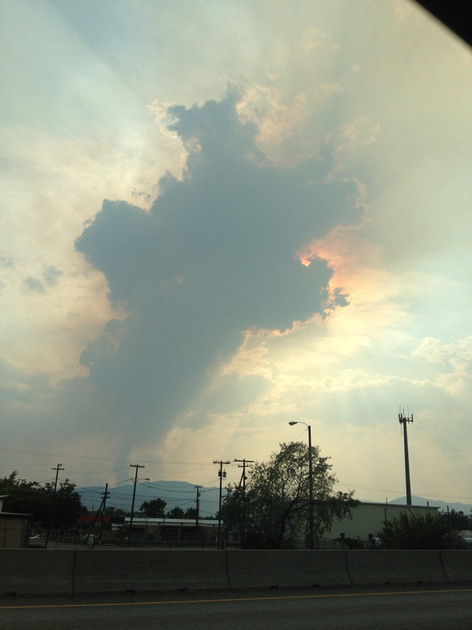 Back in Missoula, catching Mingo was a chore but eventually I stuffed him into his cat carrier. More yowling. I told him we were going home but he didn’t listen. The choice was not that difficult. I have only been gone for a few days but it seemed like an eternity. I love to travel and do not mind living out of a suitcase. Those trips are planned though and I don’t spend any time contemplating my home as charcoal. Waking up in Sleeman Gulch on a Sunday morning right now is priceless. I also was desperate to see Mingo’s face when I let him out of the cage. 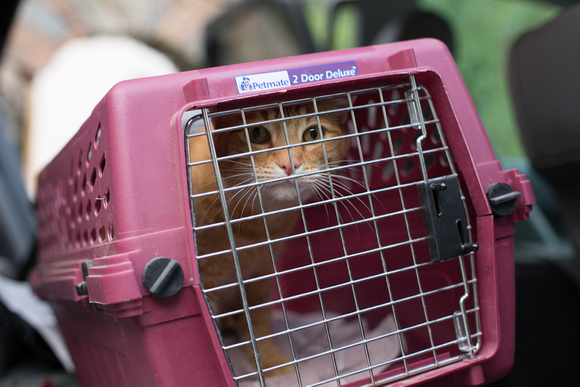 When I turned into the gulch I saw a barricade across Sleeman that read “Road Closed – Local Traffic Only”. I thought about the woman at the table yesterday who seemed to enjoy telling me that I couldn’t go home. Screw her. I drove around the barricade, looked up and saw three aircraft at once - 2 spotter planes, one on a steep bank towards the gulch, and a helicopter carrying a large water bucket.

It still sounds kind of like a war zone but I am home. I am the sole attendee of my own little party and there is no place I'd rather be… well, okay if I had the choice of being with Bea in Puerto Rico right now I would give it very strong consideration. She’ll be home day after tomorrow though.

The yowling stopped the second Mingo saw the stone arch. He knew that life was about to get much better. I let him out and left the door to the house wide open. He went in, then out. In, then out. I walked around to the front of the house and saw a little squirrel perched on one of the landscape rocks acting like he owned the place. 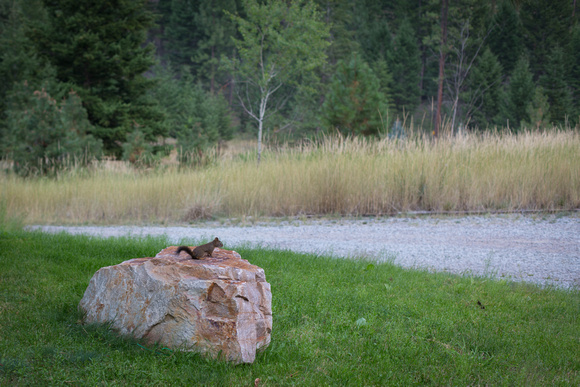 Mingo did not approve. He clearly has a lot of work to catch up so I don't expect to see him until sometime tomorrow. He is off to a great start though. 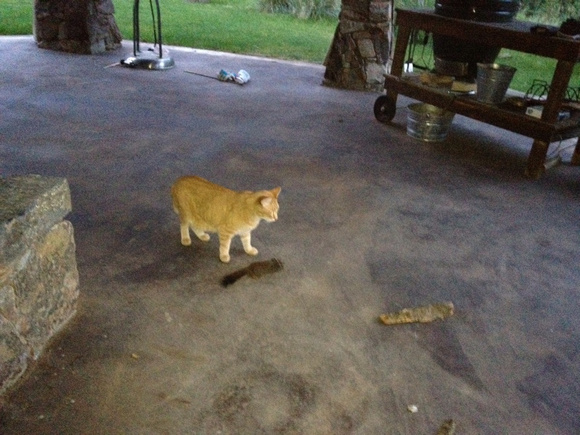 It is my understanding that we have been downgraded to a pre-evacuation order so the final nail is not in the coffin of this saga but it is, without question, much better for now. Home Sweet Home!

[Note: Many have had trouble subscribing to this blog but I think I have it fixed. Click here and click "Subscribe to Bill McDavid Photography: Blog by Email" in the upper right hand corner.] 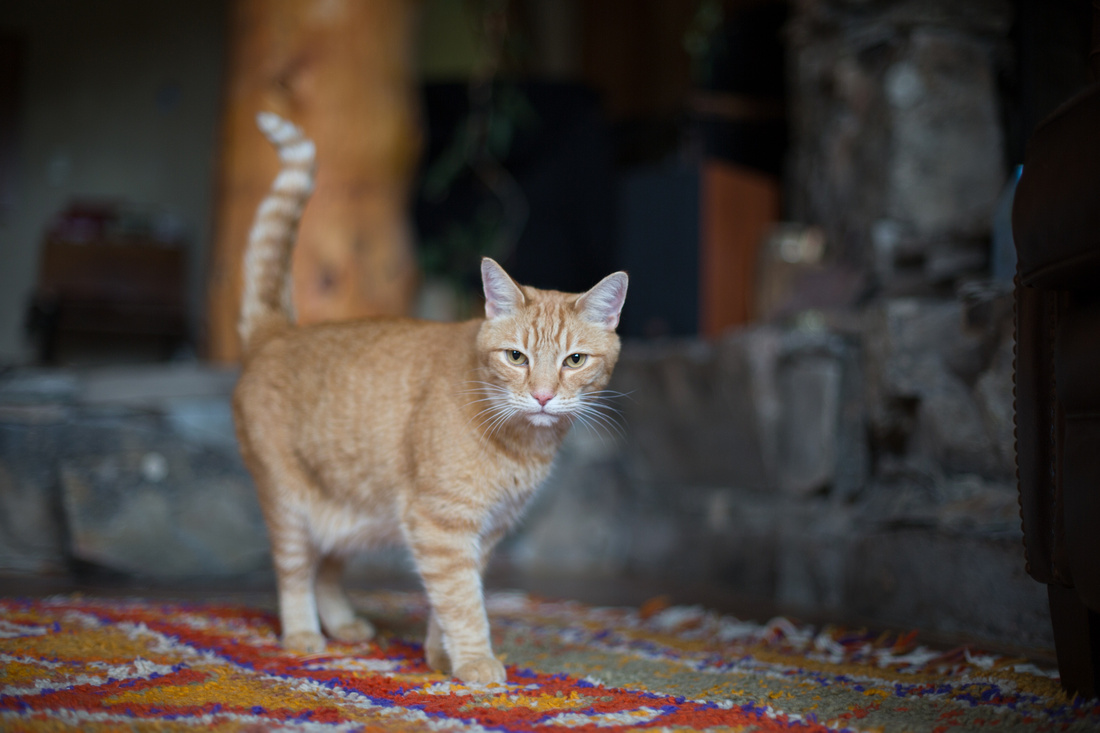 Monica(non-registered)
I love your story telling. I am so thankful God has saved your home. I am still praying for you and your family. Your Mom has asked us all to cover you in prayer when the first blog was written. She is a pretty special lady!
Lilly(non-registered)
I'm so glad this ordeal is almost over and excited that it sounds like there was no damage to the house. Funny you talked about journaling, I was telling Bea to start a gratitude journal after her birthday. There's so much more that suddenly becomes a blessing when you look at life in that way.

Staying in the present moment- That is one of the reasons I like Bikram or hunter jumping, you can't think about other random thoughts because you lose concentration and your balance is gone or in the case of riding, you can get seriously hurt. The present is all we have. Those activities teach us to just be and to allow the flow of the action or movement to determine that moment.

Like E. Tolle said "All true artists, whether they know it or not, create from a place of no-mind, from inner stillness." I believe you are a true artist and a great writer, so you're on your way. The more you allow the present moment to be your focus, the better you will get at that inner stillness, that we all seek.
Judy Arneson(non-registered)
I am a newby to your blog. When you wrote abt the evacuation, you write it as tho the reader was actually the one having to do the evacuation. You put us right there. I cried right along with you and felt the horrible emotions. I felt them again today in reading that you had a choices of where to go. Most of all Im so super happy that you went home and it was still there. Probably the best thing I have read in a week or more. So happy for you and your family.
Cody Ann(non-registered)
I am so happy for you all Bill! Please dont stop blogging...you are a great writer and i look forward to hearing about it all! Congrads home is always where the heart is! God Bless You alll.
No comments posted.
Loading...
Subscribe to Bill McDavid Photography: Blog by Email
Subscribe
RSS
Recent Posts
It’s My Party Gay Skunks and a Murdered Duck A Hard Drive Screw the Whales... Save the Heels!! A Blue Moon Montana Fly Fishing Magazine Cover Our One and Only Freedom
Keywords
Lolo Creek Complex Montana forest fire Fly fishing Montana Fly Fishing Magazine Trout Underwater Underwater Photography Indonesia Pulau Palue
Archive
January February March April May June July August September October November December
© Bill McDavid Photography
Powered by ZENFOLIO User Agreement
Cancel
Continue